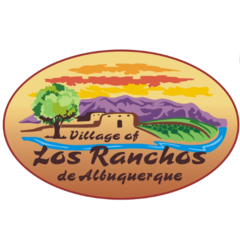 The area containing the Village of Los Ranchos has been settled by humans for at least 2500 years. During the Spanish Colonial period, there were a series of adobe villages scattered throughout the North Valley, including a community settled around a small plaza called San Jose de Los Ranchos. After New Mexico became United States territory, this community was actually the Bernalillo County seat from 1850 to 1854.

Los Ranchos and the North Valley were historically agricultural settlements. By 1920, however, much land was out of production because of recurrent flooding and poor drainage. In response to this problem, the Middle Rio Grande Conservancy District was formed in the 1920’s to implement drainage and flood control improvements in the area. A vast system of levees, ditches, laterals, drains and canals was created. Besides improving the situation for agriculture, this opened the area to increased development. Thus, when World War II and its aftermath brought a population explosion in the Albuquerque region, the Los Ranchos area became ripe for development associated with the growth boom.

Learn more about our communities: