Focusing on new innovation industries and utilizing data from the strategic plan, this council will work to identify top potential firms for attraction and growth for the market, and also in addressing obstacles such as venture capital investment in the market while leveraging UNM Anderson partnerships.

Prior to his aerospace and defense career, Hank served for 27 years in the U.S. Air Force, including two assignments as a wing commander and as the Kirtland Air Force Base installation commander.  He retired as a colonel.

In the community, Hank is Chair of the board of directors of the non-profit New Mexico Veterans Integration Centers, is Treasurer and a board director for the non-profit Dakota Tree Project, and serves on the Boards of the Albuquerque Hispano Chamber of Commerce and Albuquerque Economic Development.  He is also active in the ABQid and Verge Fund business start-up accelerators.  Hank previously served as an appointed member of the Bernalillo County Detention Facilities Oversight Advisory Board and Public Safety Advisory Board.

A graduate of Syracuse University, Hank also holds graduate degrees from Louisiana Tech University and the National Defense University and has attended executive education at Duke University, Emory University, Northwestern University, and the Center for Creative Leadership.  He is co-author and co-editor of the book Security in Korea: War, Stalemate and Negotiation, and has also been published in Airpower Journal.

Back to Advisory Councils 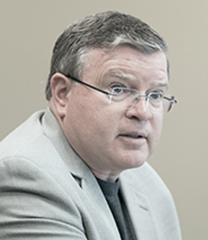