Tom is a native New Mexican, growing up in Alamogordo until moving to Albuquerque to attend the University of New Mexico, where he earned his bachelor’s degree.  He also holds an Applied Sciences Degree in Funeral Service.

Tom began his career at FRENCH in 1993.  Since then, Tom has had the opportunity to work in nearly every area within FRENCH, including his current role as President and CEO of French Funerals – Cremations, Best Friends Pet Cremation, Sunset Memorial Park Cemetery and the Cremation Society of NM. Tom and the entire team at FRENCH is dedicated to living our company mission of “Honoring and Remembering EVERY life”.

Tom and his wife, Keri, have two daughters, Kali and Aubrey and three dogs, Amber, Sammy, and Alaska.  Tom and Keri enjoy hiking together and exploring our beautiful State and National Parks.

Tom has been involved in several non-profits as a volunteer and board member.  He currently sits on the Board of Albuquerque Economic Development, the Rotary Club of ABQ charitable foundation, and New Mexico Mutual.  Tom also serves as a Trustee of the Albuquerque Community Foundation.    He has also served on the Board and is a Past Chair of the Greater Albuquerque Chamber of Commerce, Board member and Past Campaign Chair for United Way of Central NM, Past President of  Rotary Club of Albuquerque, Past President of Ronald McDonald House Charities of NM, and a former Honorary Commander for the Safety Center at Kirtland Air Force Base. 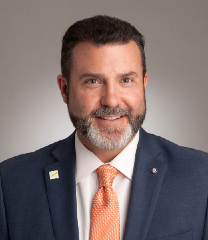