Alstate Steel, is investing $2.5 million into the expansion. The company will hire 28 new employees and deliver an economic impact of $82.3 million in the region after State of New Mexico and City of Albuquerque incentives are activated. The investment also allows the company to retain its current local workforce of 42 employees rather than relocate operations to Arizona, where it also has a facility.

To support the expansion at 203 Murray Rd. SE, Albuquerque, 87105, the State of New Mexico is pledging $250,000 from its Local Economic Development Act (LEDA) job- creation fund. The City of Albuquerque is pledging an additional $50,000 in city LEDA funds. The assistance is pending full review and approval from the Albuquerque City Council and will be awarded as Alstate meets economic development benchmarks detailed in the proposed Project Participation Agreement.

Gov. Lujan Grisham’s historic investments in economic development have so far created over 6,800 jobs with LEDA investments that will bring $5.2 billion in capital investment into the state over the next decade.

“This company has been in New Mexico for 25 years, has experienced significant growth, and is now providing services in 14 states,” EDD Secretary Keyes said. “Expanding New Mexico’s manufacturing footprint is a priority for this administration and incentivizing Alstate’s expansion will create an additional 28 new manufacturing jobs at an average salary of $49,000, while also retaining 42 current jobs. These employees will now be able to stay in New Mexico to live and work.”

“Sustained economic growth takes more than just attracting new players. We also have to make sure we’re keeping the businesses who’ve invested here for years and providing the support they need for future growth,” Albuquerque Mayor Tim Keller said. “Together, with the state and AREA, we’re building a culture that demonstrates to businesses that we value them and want them to stay in our community for the long-haul, creating opportunities for generations to come.”

Retention and Expansion Support Program for making a proactive contact with Alstate and identifying it as a strategic partner for economic assistance.

“The AREA team mobilized the moment we learned about Alstate’s potential departure from the region and reached out to our partners so that we could collectively get a compelling support package together,” Casey said. “We will continue to lead business retention efforts because we know, as evidenced with Alstate, that one phone call can be a game changer.” More information about the retention program is available here.

Alstate Steel, Inc., is primarily engaged in fabricating iron and steel and other metals for large structural purposes such as bridges, buildings, and trusses. Its customers include Intel, Amazon, Fidelity, Netflix, University of New Mexico, Facebook, Lovelace, Presbyterian, and Starbucks. As of March 15, 2022, Alstate Steel was considering relocation and expansion to a market in a neighboring state where they were offered sizable incentives.

“Our decision to stay in New Mexico was not based solely on incentives, but on the expertise of the state and local team, your leaders, and the ability to move quickly and partner with us for everyone’s success. That has stuck with me,” Alstate Steel President Jeff Wallis said. “The culture that I have always expressed in my companies is to care about
our clients.” 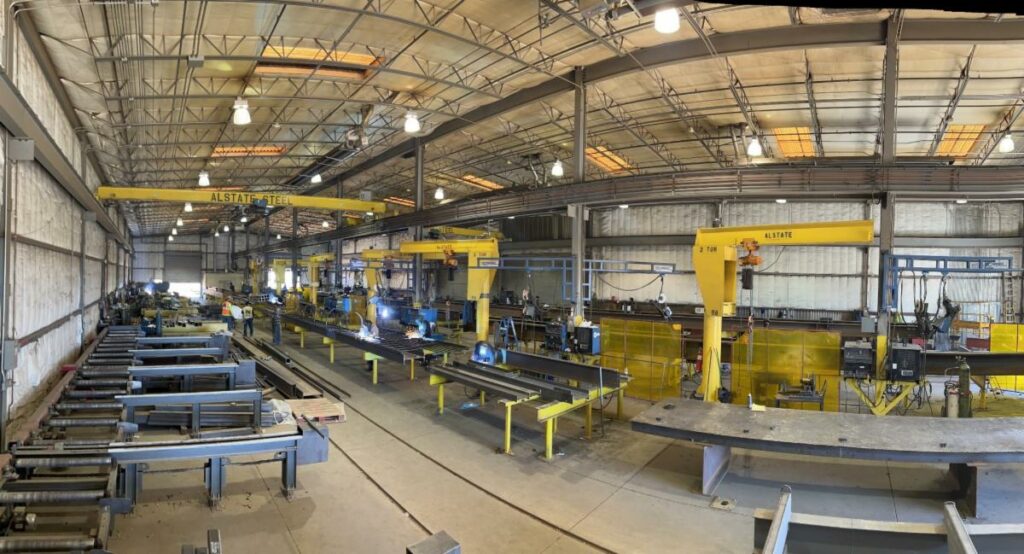