Homegrown company plans to add 70 jobs over next 5 years

ALBUQUERQUE, N.M. – The State of New Mexico and the City of Albuquerque have pledged economic assistance, contingent upon approval by the Albuquerque City Council, so that Affordable Solar can double the size of its Albuquerque fabrication facility and corporate headquarters.

Affordable Solar, established in New Mexico in 1998, offers large-scale solar and energy storage integration throughout the Western United States. The company has seen rapid growth with its technologies and plans to scale up business as state and national policies boost renewable energy and combat climate change. The project requires approval of the Albuquerque City Council.

The State has pledged $500,000 in assistance from the New Mexico Economic Development Department’s LEDA job-creation fund. The City of Albuquerque has committed to $125,000 in Local Economic Development Act (LEDA) funds, contingent upon a positive fiscal impact analysis.

Affordable Solar currently has 141 employees, and plans to add 70 high-paying economic base jobs, with salaries over $64,000, of which 90% will be filled by Albuquerque residents. The projected jobs will be created over a five-year period and will enable to company to reach a payroll of $12.8 million.

The City of Albuquerque has tentatively pledged another critical incentive, Industrial Revenue Bonds, to assist with the project, pending public review and approval by the Albuquerque City Council. Affordable Solar is requesting $7.5 million in IRBs to finance the purchase, renovation, and rehabilitation of its business site, consisting of 3.5 acres of land and an office building at 3900 Singer Blvd., NE 87109. This will become their corporate headquarters, as well as its center for manufacturing, assembly, and distribution.

“Our city and state economic development teams are working together to help homegrown businesses thrive,” Mayor Tim Keller said. “The word is out that Albuquerque is here for workers and small business and we’re providing support that will set us up for a year of recovery post-pandemic.”

“The partnerships Affordable Solar has forged with state and local governments are what we do best in New Mexico,” N.M. Economic Development Cabinet Secretary Alicia J. Keyes said. “The incentives and tools we can offer are helping businesses invest with more confidence so they can grow and create higher-paying jobs now, when we need them.”

“We support strategic expansion and retention of businesses that complement Albuquerque’s existing strengths,” City of Albuquerque Economic Development Director Synthia R. Jaramillo said. “We’re working to build up businesses, and making these incentives available is part of how we will boost local businesses in recovery.”

Affordable Solar was contracted to provide utility-scale solar service to data centers and considers battery and energy storage as a growing part of its business.

“We see a fairly robust transition to renewable energy and we anticipate there will be federal policy that drives that,” Affordable Solar CEO Ryan Centerwall said. “We are very excited to be able to continue to grow and expand in New Mexico as we pursue our mission of transforming the nation’s energy infrastructure. We are extremely grateful for the support from the State of New Mexico, the City of Albuquerque, and Albuquerque Economic Development and commend their focus on economic development in our state.”

Centerwall expects the expansion to be completed by the end of 2021 with new hiring proceeding as quickly as possible.

Albuquerque Economic Development, Inc. (AED) the area’s non-profit private sector economic development organization, has worked with Affordable Solar for many years to assist with the company’s growth and provide technical assistance for the project.

“Affordable Solar is an innovator and has developed products and methods designed to reduce costs and allow for rapid deployment of solar and energy storage projects. This expansion will house the company’s component fabrication operation as well as their corporate headquarters,” Danielle Casey, AED President and CEO, said. “I am particularly proud of the work of the business development team at AED, under Debra Inman’s leadership, which contributed significantly in bringing this investment to fruition.”

The City of Albuquerque is the fiscal agent for the LEDA awards, which are contingent on the company reaching economic development benchmarks, including protecting the community and state’s interests related to employee headcounts and potential facility closures.

The company has also been awarded $882,555 from the NM Economic Development’s Job Training Incentive Program (JTIP) to train new workers and upskill those seeking a higher wage. 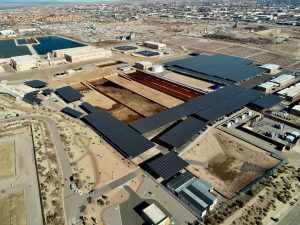 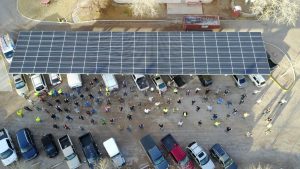